Spray Reaches for the Cliff

This was taken whilst “Waiting” for some surveying equipment to dry which gave the group I was part of an excuse to have a brief break.

We were surveying during a time when the tide was low and the weather was good. However, the waves were rather intense.

This is a rather massive amount of water in motion. It reached pretty high up, although the shot of this particular spray did not get as high as some of the others I witnessed.

This is my submission into the seventy-second Lens-Artists Photo Challenge.

The challenge is hosted by four people and cycles weekly:

This week is hosted by Amy and next week’s will be hosted by Tina.

I recommend checking out the challenge to see how people interpret each theme.
I also recommend giving it a go. 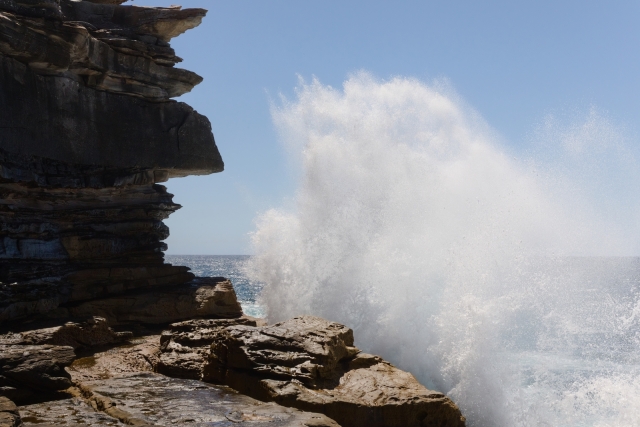 I'm some guy that does stuff. Hoping to one day fill the internet with enough insane ramblings to impress a cannibal rat ship. I do more than I probably should. I have a page called MS Paint Masterpieces that you may be interested in checking out. I also co-run Culture Eater, an online zine for covering the arts among other things. We're on Patreon!
View all posts by Stupidity Hole →
This entry was posted in Photography and tagged cliff, geology, lens-artists, motion, nature, ocean, rock, spray, waiting, water, wave. Bookmark the permalink.

10 Responses to Spray Reaches for the Cliff